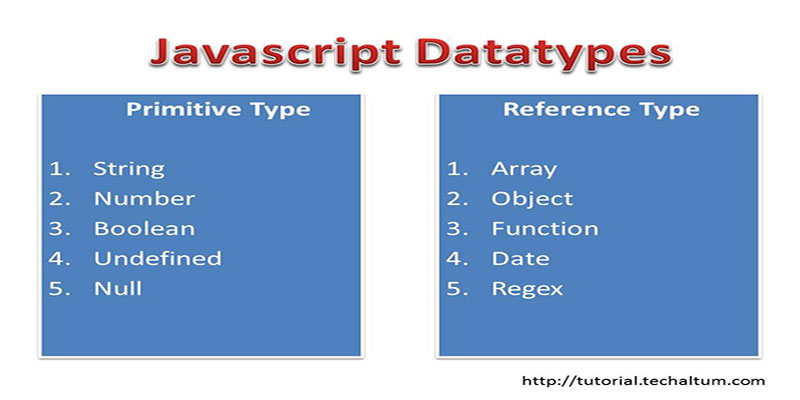 Datatypes in javascript means the type of data stored in a variable.

As Javascript is loosely typed scripting language, there is no type cast in javascript. We can create any type of data using a single variable i.e. var.

var means a variable which can store any type of data. Data type of variable is not declared.

We can also use const and let to declared variables.

Primitive datatypes are the basic or common data types in javascript. Like string, numbers, boolean, undefined and null. They are very commonly used data types.

var is used to decalare primitive datatypes in javascript.

Anything written in single and double quotes are strings in javascripts. Strings are used to store name, email, city name, password etc in javascript. JavaScript Strings.

JavaScript Boolean are true and false. Booleans are used in conditions, comparision etc.

JavaScript null is a special object with empty value. null is used where value is defined, but still it is not there. It is also used in exceptionl handling.

Reference are datatypes based on primitive. Like Array, Object and Functions. Everything is JavaScript is either a primitive datatype or Object. Even Arrays and Functions are objects, but they are build-in objects.

typeof operator in javascript is used to check data type of a variable. It can return string, number, boolean and undefined. For reference type and null, typeof operator will return object.